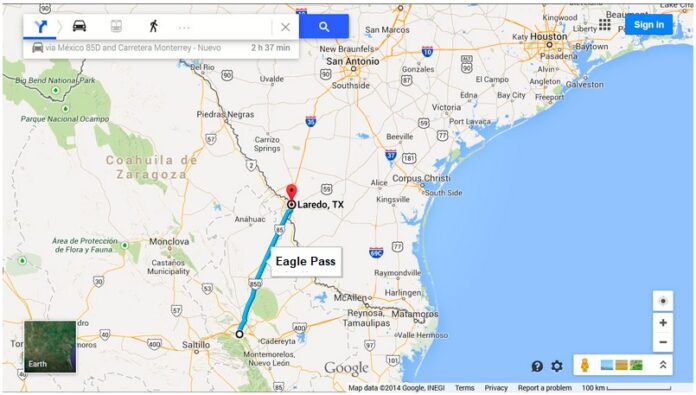 “A Texas Army National Guard Soldier assigned to Operation Lone Star has gone missing along the river during a mission-related incident, Friday, April 22, 2022, in Eagle Pass, Texas,” a TMD spokesperson told National Review. “The Soldier has not been found. We are aware of reports of a fatality, although those reports are inaccurate.”

The statement adds: “The Texas Military Department, Texas DPS, and Border Patrol are working rapidly to find the Soldier. More details will be released as they become available.”

The TMD’s comment disputes reporting by Fox News that said the soldier drowned while rescuing migrants in the river and that a body had been recovered.

Maverick County Sheriff Tom Schmerber told the Washington Examiner on Friday afternoon that investigators have recovered the walkie-talkie and body armor that belonged to the soldier, who has been missing since 8:30 a.m. local time. As of Friday afternoon, military and police were still searching for the body.

“The National Guard soldiers saw a group of immigrants crossing and one of them — a lady — it appeared that she was drowning,” Schmerber told the outlet. “The National Guardsman jumped into the river and tried to rescue him, and he never came out. So they called us and said, ‘We’re still looking for him.’”

“I just spoke with investigators. They found — when he jumped in, he left a walkie-talkie … and body armor. That’s all they’ve found so far,” Schmerber said. “We’re still searching for the [soldier’s] body. That area where he drowned, it’s a very dangerous area, has a lot of currents.”

The sheriff said the woman who appeared to be drowning is safe and in U.S. custody.

The reports come as Border Patrol agents have been overwhelmed with an influx of migration at the border, which is only expected to worsen when the Title 42 public health order is lifted next month. The policy has allowed border agents to immediately expel illegal border crossers but is slated for termination on May 23.

A group of more than 70 sheriffs recently urged Congress to take action to extend Title 42, which was first handed down under the Trump administration at the start of the pandemic.

A letter from the sheriffs to Senate Majority Leader Chuck Schumer (D., N.Y.) and Senate Minority Leader Mitch McConnell (R., Ky.) notes that Border Patrol agents have already encountered more than a million migrants in just the first half of the fiscal year.

With Title 42 set to end next month, the Biden administration has warned some 18,000 migrants could turn up at the border each day.

“Title 42 is the only policy provision left since January 2022 that helps to stop the unhealthy (no COVID testing) border crossings by millions of illegal entrants to our country,” writes the group of sheriffs organized by the National Sheriff’s Association in the letter.