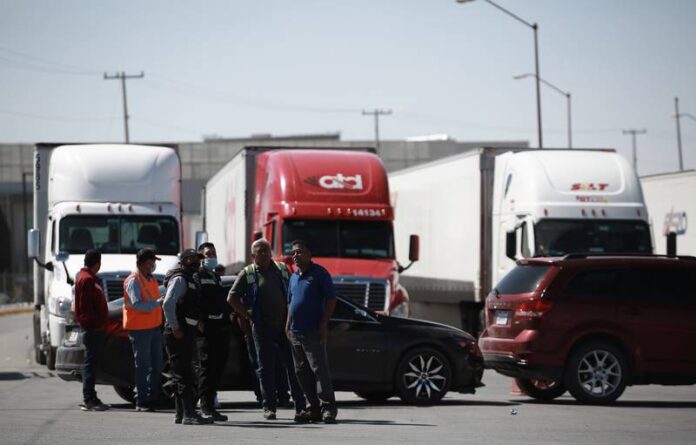 Mexican carriers, who have arrived at the border loaded with agricultural products, have had to wait up to 30 hours to enter the United States.

Delays caused by the security inspections imposed by the governor of Texas, Greg Abbott, at the border ports of entry, caused protests from Mexican truck drivers who bring agricultural products, as well as an urgent call from the marketers of that merchandise in the United States, to modify the measure.

Abbott announced last week that all commercial traffic from Mexico to Texas would be subject to inspection by state officials after passing federal screening at ports of entry.

This measure has caused waiting times for trucks arriving at the border loaded with agricultural products to extend to more than 30 hours in some cases.

Even the Pharr International Bridge, which connects to the Mexican city of Reynosa, was closed as truckers in Mexico blocked access to the road in protest of the inspections. This is the main bridge for importing agricultural products to the United States.

Hinojosa, vice chairman of the Texas Senate Finance Committee, pointed out that 3,000 trucks a day usually pass through the Pharr Bridge, but since the inspections began last Thursday, only about 300 trucks have managed to cross in 24 hours.

In turn, the president and director of the Texas International Association of Agricultural Products Dealers (TIPA), Dante Galeazzi, explained that this situation has seriously impacted the movement of fresh produce from Mexico to the United States.

He indicated that there are seven bridges over the Rio Grande border (Río Bravo in Mexico) that allow the passage of agricultural products, and that during the weekend the two with the highest traffic (those of Pharr and Laredo) experienced the longest delays, with lines of trucks stretching for miles waiting to enter the United States.

Galeazzi assured that the reinforced inspections have nothing to do with Abbott’s declared objective of stopping the flow of migrants or contraband since the trucks are subject to inspection by various federal agencies at the border.

Last Friday, in a letter addressed to Abbott, the head of TIPA, which imports and markets agricultural products that pass through the Texas ports of entry, stated that annually 9 billion dollars and 1,280 million pounds (581 million kilos ) of agricultural products pass annually from Mexico to the United States.

“We implore you to modify the deployment of this action in light of the drastic impacts it is having on the movement of commerce,” he said.

The business leader also urged the Republican governor to “work with the Department of Homeland Security to develop a more effective process that meets the nation’s need for security and balances it with our reliance on efficient commerce.”

Why were inspections started in Texas?

This provision was made last Wednesday in response to the decision of the Joe Biden government to lift the health regulations (Title 42) that allowed the expulsion of undocumented immigrants due to the COVID-19 pandemic. Given this, Abbott threatened to send the detained immigrants on buses to Washington DC

The governor, known for his ultra-conservative positions, assured that the buses will leave the migrants on the steps of the Capitol, in the US capital, where the Biden Administration “will be able to immediately attend to their needs,” he said in a statement.

Abbott, who is running for reelection as governor of Texas, said that Biden has applied an “open door” policy at the border that has led to “unprecedented” numbers of border crossings.

The Business Coordinating Council (CCE) explained that the immigration control and border security measures generate an economic impact and operating cost overruns amounting to 8 million dollars a day, mainly affecting the maquiladora, automotive, technology, and perishable industries, among others.

In addition, they accused that this situation has caused delays of up to 20 hours in the crossing of cargo trucks and a drop of more than 70 percent in the commercial flow, which can cause a collapse in international cross-border trade.

For this reason, businessmen warned that the increase in crossing time puts at risk the employment and quality of life of thousands of citizens who depend economically on the different activities that are affected.

Transportation is considered an essential activity for goods and merchandise, including basic necessities, to reach the entire North American territory.

Mexico rejects inspections imposed on the US border

The Ministry of Foreign Affairs (SRE) expressed this Tuesday its rejection of the security inspections imposed on cargo transport by the governor of Texas, Greg Abbot.

“The SRE rejects this state measure that significantly harms the flow of trade between our two countries,” the Mexican Foreign Ministry said in a statement.

He added that “as an inevitable consequence of this provision, merchants in Mexico and the United States are losing competitiveness and considerable income.”

In the note, the Foreign Ministry recalled that the inspections are implemented at four border crossings with the state of Texas: Zaragoza-Ysleta, Córdova-De las Américas, Colombia-Laredo, and Reynosa-Pharr.

“It is estimated that in these four ports of entry only a third of the usual trade is crossing,” he added.

He pointed out that currently “adjacent ports are being used during extended service hours to better manage flows in conjunction with federal authorities from both countries.

“However, these measures could be carried out soon at any other crossing into the state of Texas,” he said.