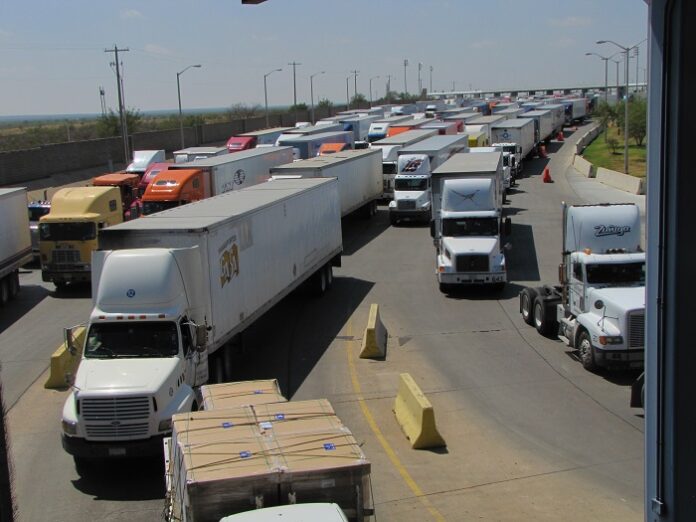 A shootout between gunmen and Mexican authorities has jammed up commercial traffic through Laredo, Texas, according to officials.

The incident occurred Wednesday night, when gunmen tried to enter the Mexican state of Coahuila along the U.S.-Mexico border. They were confronted by law enforcement agents, according to a statement from the Public Security Secretariat of Coahuila.

“Because of the violence yesterday, there’s Mexican law enforcement present on the Mexican side, and they have checkpoints, they held traffic, because I believe they found some bodies,” Taboada told FreightWaves.

“They are not blocking the bridges. The flow of trucks is still flowing into the World Trade Bridge and Colombia Solidarity [International] Bridge because of the checkpoints from the Mexican military and Mexican police.”

Ernesto Gaytan, general manager of Laredo-based Super Transport International, said the violence and police checkpoint have caused some of his trucks to lose a day’s worth of transit time.

“We’re definitely going to be behind. It’s been hours. There’s a lot of carriers between the Colombia Solidarity Bridge and World Trade Bridge, so a lot of trucks will be affected. Thankfully, it happens in Mexico, you never see the violence spill over to the U.S.,” Gaytan said.

The clash occurred around 7 p.m. Wednesday when men aboard 30 pickup trucks tried to enter Coahuila state territory through a dirt road known as the “gas gap,” which is parallel to the Rio Grande River and Mexico Federal Highway 2.

The highway connects the Mexican states of Nuevo León and Tamaulipas, and is less than 5 miles from the Colombia Solidarity Bridge and 10 miles from Laredo’s World Trade Bridge. The gunmen were repelled by state and federal security forces.

It’s not clear why they were trying to enter Coahuila, nor whether they were attempting to cross the border.

After the shootout, the armed civilians fled back to the Mexican town of Anáhuac.

“The confrontation left three civilians with injuries that did not endanger their lives, as well as a vehicle of the security forces damaged by fire,” Mexican authorities said.