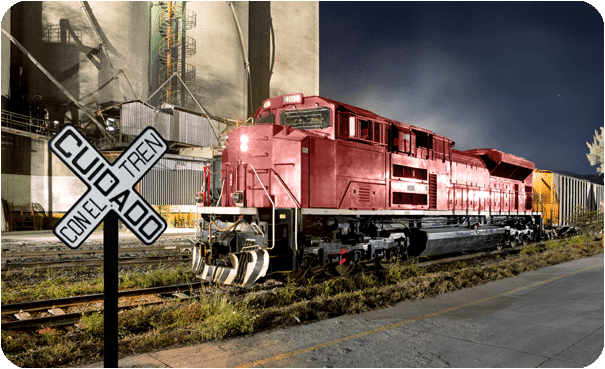 The federal government said that they will seek an agreement with the country’s railway companies regarding the changes that are proposed in the initiative on the Regulatory Law of the Railway Service, among which is the reduction of railway concessions from 50 to 35 years, as well as the Isthmus and Southeast Railroad are public.

“It was not a proposal by the Executive, it is a proposal by the legislators and it has not yet been approved, I think it is in committees and has to be reviewed because we do not want a campaign against Mexico to be created that we are changing the rules, that contracts are being canceled or contracts modified; So, we are going to seek an agreement in all cases so that those of the companies do not feel affected and at the same time the interest of the nation is strengthened, ”said President Andrés Manuel López Obrador.

It should be remembered that on April 29, the  Senate approved various reforms to the Regulatory Law of the Railway Service promoted by Senator Ricardo Monreal, among which is the reduction from 50 to 35 years of railway concessions, fines of 5% per 10% of their income for not complying with the corresponding regulations, changes in rates every two years,  transparency and accountability in the activities carried out by the Railway Transport Regulatory Agency (ARTF), among others.

The foregoing, due to the fact that according to the initiative the railways do not present effective competition conditions, therefore, in the absence of adequate regulation, concessionaires take advantage of their market position to set rates and other service conditions unilaterally and earn “extra normal” earnings.

He commented that the road from Ixtepec to Tapachula will be rehabilitated, to have the entire Isthmus Railroad and the Southeast Railroad recovered, so that later from the Isthmus to the north, which is concessioned to large companies, “reach an agreement to see the years of concession ”.

Similarly, it considered conducting an investigation on the refund of VAT to Kansas City Southern de México (KCSM) for 12 billion pesos, “to see if the refund would proceed or not; and if legally it is possible, if there was an abuse, to recover that money for the public finances ”.

The Federal Commission for Economic Competition (Cofece)  said that reforming the regulatory framework of the Public Service of Railroad Freight Transport (SPTFC) would increase the railroad’s share in national freight transport from 25% to 31%, an increase of 21,000 million euros. pesos, in terms of the value of the cargo, transported, in addition to solving various obstacles currently registered by this service.

According to the preliminary version of the Competition Study in the public freight rail transport service, the upcoming expiration of some exclusivities and concessions give an opportunity to reconfigure the network in the medium term and are relevant in the context of the reform of the Regulatory Law of the Railway Service (LRSF), recently approved in the Senate and under discussion in the Chamber of Deputies, as it provides information on the operation of this sector.

The antitrust body identified certain problems that reduce the efficiency of the system derived, in part, from the model of vertically integrated regional concessionaires itself, as well as from some regulatory failures.

“One of the most important problems identified in this study is that the network operates in a fragmented manner, that is, the concessionaires concentrate their activities on their own sections with limited connectivity and continuity towards the sections of others,” he said.

He mentioned that Ferromex and Kansas City Southern de México (KCSM) operate 71% of the network and concentrate the concessions in most of the most important nodes in terms of cargo volume, including all border crossings in the north of the country and ports with greater volume of international trade, which allows them to move up to 82% of the total cargo.

These companies concentrate their services in the busiest nodes and corridors in the country, such as Altamira, Mexico City, Ciudad Frontera, Ciudad Juárez, Guaymas, Manzanillo, Monterrey, Nuevo Laredo, Piedras Negras and Veracruz.

Currently, 92% of the 17,360 kilometers of roads are managed by 3 economic groups: Grupo México, which controls the Ferromex and Ferrosur networks with 56%; KCSM with 24%, and Ferrocarril del Istmo de Tehuantepec ( FIT) with 12%. In 2018, Grupo México and KCSM concentrated 95% of the rail freight mobilized in the national territory, with shares of 61% and 34%, respectively.

“The design of the duration of the exclusivities affects that the ‘field is not even’ between small and large dealers. Therefore, a more symmetrical network design between concessionaires, with similar durations of exclusivity, could lead to greater competition in the system, by guaranteeing a more even bargaining power among competitors to access the other networks. This could be contemplated once the current concessions expire, “said Cofece.

The agency maintains that there is little use of rights of way since, of the 54 feasible to use, 10 are not used and in 11 no evidence was found that they are being used. It was only able to verify that 61% of the established rights of way are used.

Similarly, there are high rates in the “first and last mile” that make interline services between rail networks more expensive, hindering interconnection and competition.

While in this case, the Railway Transport Regulatory Agency (ARTF)  lacks the powers to impose fines and has not established regulatory criteria for the delivery of information by concessionaires.

He stated that as exclusivities and concessions expire, there is an opportunity to reconfigure the network; However, in the short term, it is necessary to make regulatory changes to favor the efficiency of the Mexican Railway System (SFM).

He identified that the privatization generated a system of profitable concessionaires and investments, the railway network did not grow. The laying of railroad tracks in 1996 was 26,662 kilometers and for 2019 it was 26,914 kilometers and the percentage of the tracks operated decreased. In contrast, the length of the global rail network increased 3.9% between 2004 and 2018. For its part, the national paved highway network increased 60% from 2001 to 2018, from 110,910 to 177,192 kilometers, mainly driven by public investment.

Under this scenario, Cofece made 25 recommendations to improve the efficiency of the network and competition among concessionaires, establish a new regulation that guarantees conditions of non-discriminatory access to the networks of the different concessionaires, that the ARTF has greater powers, design a rate regulation, to name a few.

“It is necessary to reconfigure the network, once the current concessions expire, to avoid imbalances in the bargaining power between the different concessionaires and promote competition on the most important routes. In general, a more equitable design of the networks would generate a ‘more even field’ that would encourage competition between the concessionaires. This redesign must provide that the new rules are stable, so that the concession companies have sufficient certainty to make the necessary investments to expand and preserve the rail network. However, this recommendation cannot be carried out in the short term, considering that there are more than 2 decades before the current concessions expire, ”he said.

Therefore, in the short term, it is necessary to establish non-discriminatory access rules for one concessionaire to the roads of another, a regulation that encourages the use of interline services and achieves towing rights rates closer to the competitive level when there is a bottleneck at the origin or destination. This in addition to strengthening the capacities and powers of the regulatory agency.

The document will be available to the authorities, Congress of the Union, users, concessionaires, academia and the general public, in order to receive comments to enrich it, before publishing its final version. Interested people can send their suggestions from this date until June 26.