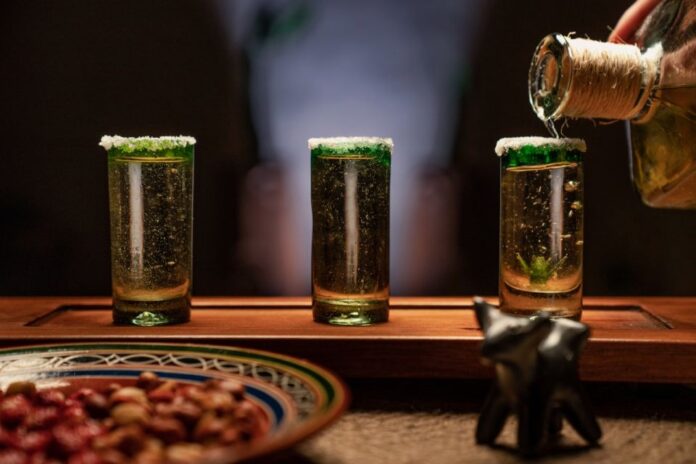 The rise of tequila is causing the emergence of beverages made from agave with a similar process or products that have a tequila flavor but cannot be legally called tequila.

Tequila is the most popular Mexican alcoholic beverage in the world. The distillate is very popular in the United States, it is the number one buyer abroad, followed by Germany, according to statistics from the Tequila Regulatory Council.

Such is the rise of tequila and the business it represents, that even famous Americans have decided to venture into the tequila industry, the most recent and controversial case is that of Kendall Jenner, who after the launch of her 818 tequila received harsh criticism and has been singled out for cultural appropriation.

A non-Mexican person can have their own brand of tequila, as long as all the legal requirements that protect authentic tequila, one of the beverages in Mexico that have a Denomination of Origin (DOT), are met. The protection granted by said denomination involves different aspects, among which the extraction, production and elaboration of tequila stand out.

Tequila is made exclusively from “Agave tequilana Weber blue variety”. To be called tequila, it must be produced in Mexico, specifically in the places that its DOT indicates: all the municipalities of the state of Jalisco, in addition to certain regions of Nayarit, Michoacán, Guanajuato and Tamaulipas. Any other distilled beverage from Agave tequilana Weber blue variety made in other areas is not legally tequila.

Agave distillates made outside of Mexico

Some alcoholic beverage producers outside of Mexico have tried to give their products names similar to tequila. As happened in the United States with a drink made in Temecula (California) called “temequila”, an agave distillate in which a process similar to that used to make tequila was followed.

It did not take long for the Tequila Regulatory Council to warn the producer of “temequila” to stop calling the drink by that name, considering that it was phonetically similar as to mislead tequila buyers, who might think it is a Genuine drink made in Mexico, as reported at the time (2005) by the Los Angeles Times.

Mexican spirits similar to tequila but outside the DOT

The popularity of agave distillates has also led companies like Los Angeles-based Revel Spirits to make their own drink with ingredients and techniques similar to those used to produce tequila and mezcal.

Revel Avila is offered white, rested, and aged. In the bottle, it is presented as triple distillate 100% agave. This drink is made in Mexico, although outside the places established in the Denomination of Origin.

“Although it has the same base as tequila, Ávila’s products are made from 100% pure Agave in the Morelos region of Mexico, by a group of families that have perfected their distillation processes”, can be read in the Revel Avila page, where they also announced that they are about to launch “El Popo Avila”, a name that refers to the Popocatépetl volcano.

In recent months the lawsuit between the Tequila Regulatory Council and the Dutch brewer Heineken has also become controversial, the reason being Desperados beer. That supposedly has a touch of tequila and places the image of an agave. The reality is that it uses flavoring, it contains less than 1% of the agave distillate.

To include the word “tequila”, the products must have at least 25% of the Mexican drink in the total alcoholic base.

Given the popularity of tequila, VinePair notes that entrepreneurs will look to offer tequila-flavored beverages in different formats: “Don’t be surprised if you come across more hard seltzers and canned cocktails that list the key ingredient inside as 100% agave liqueur. But you will know the truth, that the liquid is not really tequila and it was not made in Mexico. “

False. The idea that tequila drives you crazier than other types of liquor. In the 1950s tequila became popular in California and it was discovered that many people were confusing mezcal ( tequila is a type of mezcal) for mescaline, the psychedelic alkaloid similar to LSD.

Real tequila has a worm in the bottle

False. There are some typical worms from agave plants that used to get into the process. But today, this should not happen.

However, you can enjoy the chinicuiles (red worms) that grow in the roots of agave plants and the maguey (white) worms that are larvae that live inside the leaves of the agave salmiana in some dish of Mexican gastronomy, in sauces or seasoned and in tacos.

Tequila should not get cold

True. Although there are current trends they include drinking cold tequila and even ice cream. If the tequila gets cold it can lose some of its flavor and smell characteristics, explains Casa Sauza.

False. Like other spirits, tequila does not lose its characteristics over time. In order to keep it in optimal conditions it is necessary to keep it hermetically closed since when it is exposed to the air, the alcohol evaporates.

It is recommended to place the bottles in an upright position to prevent the liquid from touching the cap, which can cause corrosion that affects taste and quality.

Tequila must be drunk from a shot glass

Not necessarily. Although a shot glass is commonly used to drink tequila, it is not the most recommended method of consuming it. Tequila is all about aromatics if you really want to appreciate it, you get the best experience with a glass of white wine or where there is enough space between the liquid and your face for you to catch its aroma, says Martineau.

In fact, there is a special glass in which the characteristics of tequila can be better perceived.

Tequila is made from any agave

False. Tequila is not prepared from a cactus as there is also the myth, the agave is not a cactus. The tequila is prepared exclusively from the pineapple of the “blue variety tequilana weber agave” whose maturation requires between six or seven years. With some other agaves of other species, other Mexican drinks are made such as mezcal, pulque, sotol, bacanora and raicilla.

All tequila tastes the same

False. In the Valley of Jalisco the highest temperatures and more precipitations; it is associated with a drier style of tequila. The floors are ash-colored.

While in the Highlands, the soils are rich in iron and very red, which produces sweeter and more fruity tequilas. Because it is cooler and drier in the highlands, agave matures for a longer period. Agave pineapples have a higher sugar level because they get bigger, explains Chantal Martineau, the author of How The Gringos Stole Tequila in First We Feast.

Añejo tequila is the best tequila

Depends. It is a matter of the tastes and preferences of each person. The best tequila can be white if you like the more intense flavors of agave. On the other hand, if you prefer sweeter and more complex notes that only a wooden barrel can provide, vintage tequila is for you.

Tequila and 100% Agave Tequila are the same

False. There are two categories: 100% Agave Tequila and Tequila.

100% agave tequila is made exclusively with sugars obtained from the agave plant and is immediately bottled. The tequila category is 51% agave sugar and 49% other sugars.

Tequila does not cause a hangover

It depends. It is said that a 100% agave tequila, if taken neat, does not cause a hangover the next day. Some factors that influence the effects of hangovers have to do with the amount and frequency of alcohol consumed.

Finally, if someone tells you that an authentic tequila can be made anywhere in the world where agave grows, it is a lie. The tequila has to be Mexican as its Denomination of Origin (DOT) indicates it. It is produced in Jalisco, in addition to certain regions of Nayarit, Michoacán, Guanajuato and Tamaulipas.

The typical dishes of Durango gastronomy