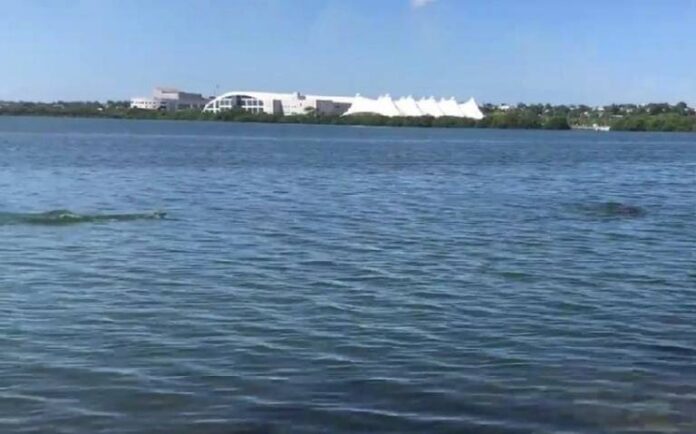 Tamaulipas state authorities report that a man entered the “Carpintero Lagoon” and was bitten by a large crocodile.

The man who entered the Carpintero Lagoon in Tampico to cool off on the afternoon of this Friday, June 24, resulted with injuries to his right arm and head, after being attacked by a large-size crocodile approximately three meters long.

The event, according to the paramedics of the Red Cross of Tampico, was recorded on Perimetral Boulevard and Matienzo Street in the Barandillas neighborhood, very close to the downtown area of ​​this port in southern Tamaulipas.

THE MAN INVADED THE CROCODILES’ HABITAT IN TAMPICO

The man himself accepted that he entered the waters of the lagoon to mitigate the heat when suddenly the reptile approached and attacked him, tearing a piece of his right arm, and in a second attack, the croc injured the man’s skull badly.

The injured man, as he could, managed to get out on dry land to prevent the animal from continuing the attack, being helped by people who were at the tourist site.

César Cedillo, an expert in managing the species and a member of the so-called Tampico SOS Crocodile Patrol, arrived at the scene of the events.

“He is a person who entered the lagoon and unfortunately had a negative interaction with a crocodile and the doctors at the Canseco hospital will follow up the case,” he declared to the local media.

The Red Cross rescuers proceeded to put him in an ambulance to take him to the hospital. Although he was conscious, the victim seemed to be in shock, in addition to presenting abundant bleeding from the wounds.

ONE YEAR AFTER THE DEADLY ATTACK ON A WOMAN

This attack by a crocodile occurs just over a year after the one recorded on June 21, 2021, when a homeless woman went into the Carpintero Lagoon body of water to wash her clothes and was attacked and killed by a huge crocodile right on the spot.

Just like on that occasion, the Tampico Civil Protection and Fire Department personnel declared they are looking for the animal that perpetrated the aggression.