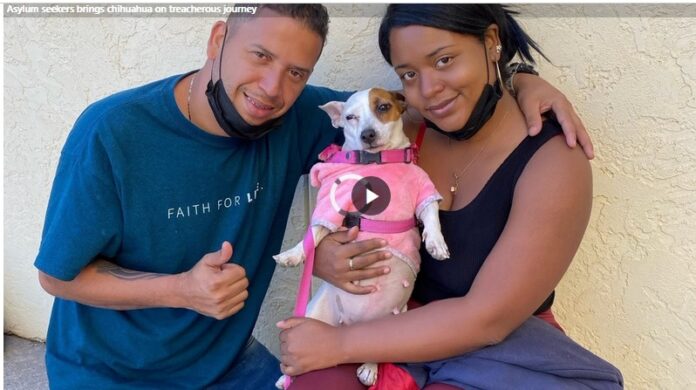 CIUDAD ACUÑA, TAMAULIPAS.- Fox San Antonio has reported about people coming to the Mexico border with Texas for years.  It’s a journey that only allows for small mementos of home to be brought as families are split apart in some cases to survive political instability.  Investigative Reporter Yami Virgin witnessed some will risk everything to bring man’s best friend on the treacherous journey.

Unrest all over the world has forced hundreds of thousands to make a journey many of us wouldn’t make. The journey to the U.S. through South and Central America, where not everyone makes it out alive.

“I saw an 11-year-old child slide 100 meters from what is called “death mountain” he died from internal injuries,”

Most only come with the bags they can carry leaving behind family, memories, and their four-legged best friend.

“Because of the situation, we are living through in Venezuela. There is no progress,” says Victor Romero, a Venezuelan asylum seeker.

Venezuelans Victor and Diana Romero couldn’t bear to leave behind their best friend whom they say is more like their child.

They say they carried the 4-year-old chihuahua in a baby carrier on their chest through the Colombian-Panamanian jungle known as the Darien Gap. After 2 months of walking, going on ferries and busses they made it to Acuna, Mexico.

That’s where they crossed the Rio Grande with Polly.

Thanks to one female border patrol agent, Polly was given a temporary home until they could be reunited, either on the U.S. side or in Mexico depending on their processing.

“She is going to step in in this case and hold on to the pet until it is determined what the proper pathway is for the immigrants who have come across and then if possible, we will reunite them at that time,” says Acting Chief Juan Bernal, Border Patrol Del Rio.

Acts like this one are among the things agents do when tv cameras aren’t around to help.

No cost to taxpayers and one dog’s life was saved. An act of kindness not lost on the Romeros.

“You know the agents don’t have to do this? They are doing it to help you,” says Yami. “Yes we know,” says Romero.

Within a day the Romeros and the chihuahua they raised were reunited. The agent who wishes to remain anonymous brought Polly to the spot where they would take a bus to Houston and reunite with family here in the U.S.

“When you are with God you have nothing to fear,” says Romero.