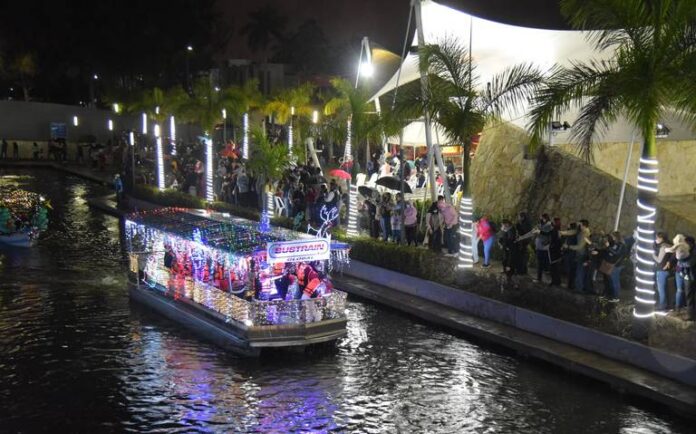 The weather conditions were not an impediment for hundreds of Tampico families to gather on Sunday, Dec. 19th, at Paseo de la Cortadura; to enjoy an extraordinary Nautical Christmas Parade led by the Municipal President Chucho Nader and his wife Aída Féres de Nader, President of the Tampico DIF System.

At 6:30 p.m. on Sunday and after a spectacular pyrotechnic display that filled the port’s sky with light and shapes, the more than 30 boats paraded one by one, adorned with multicolored lights and Christmas motifs throughout the length of the canal, which also wore all its charm with fully illuminated bridges, columns, and walls.

He highlighted that the Christmas nautical parade continues to consolidate as one of the most important traditions in the cultural calendar and is part of the tourist offer that the city has for its visitors.

“With the participation of society and active organizations of the municipality, we continue to strengthen these traditions that, in addition to generating identity and belonging, allow us to expand the tourist offer of Tampico during the Christmas season,” he said.

The president appreciated and thanked the participants’ enthusiasm for decorating their boats with Christmas motifs, despite the weather conditions; and he stressed that the consolidation of the city as the most important tourist destination in Tamaulipas is a task that involves the whole of society.

Attendees, distributed throughout the length of the canal, also enjoyed the boat ride, a varied music festival that included popular, Christmas, and Folk music.

Tampico; Grandfather destroys entrance and vehicle by forcibly entering the vaccination line at the UAT (video)