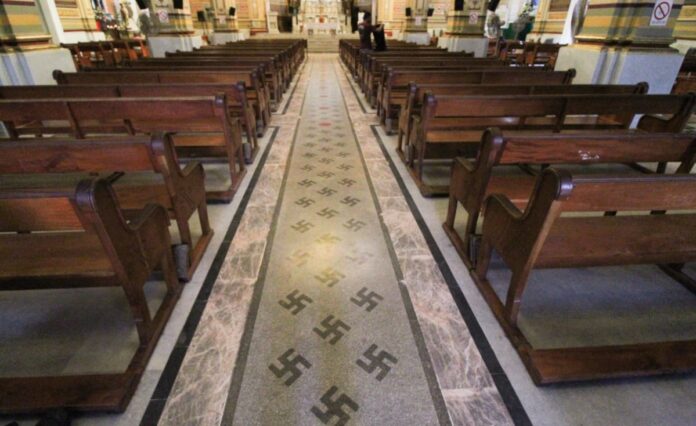 In Mexico, there is a temple that baffles its visitors due to the presence of Nazi symbols. We tell you where it is and what its history is.

Since the Nazi swastika is the symbol most censored by all of humanity, it is not surprising that all those who enter the Cathedral of Tampico for the first time are frozen to see that the floor of the temple is engraved by 141 swastika crosses.

What is the Nazis’ link to this building?

And in the absence of explanations, visitors begin to speculate about the reason why such an ill-fated insignia related to Hitler, hatred of Jews, racial supremacy and death, is in the most important church in the state. The most common is that the construction of the enclosure was financed by a sympathizer of the National Socialist German Workers’ Party, is it?

History of the Cathedral of Tampico, before the Nazi symbols

According to the documents, the Tampico Cathedral began to be erected in 1841 under the design of Lorenzo de Hidalga and the supervision of the San Carlos Academy. Concluding in 1872. So far, for the dates, we can see that the temple was not made thinking of showing sympathy with the Nazis, since this ideology, with everything and swastika, began to be established in 1920.

But let’s not get ahead of ourselves because strong doubts are coming. In 1917 the central nave of the Cathedral of Tampico collapsed, as if that were not enough a few years later a lightning bolt made the west tower fall, both events ended up leaving the temple in ruins. It was then that the controversial oil tycoon originating in the United States, Edward Doheny, came to the rescue with their money.

With money from Edward Doheny, the floor with Nazi symbols is installed in the Cathedral of Tampico

The millionaire financed the construction of new domes, vaults, walls, columns, and of course the floors that are preserved to date, including that of the 141 swastikas that would have finished being installed in the central corridor of the temple between 1926 and 1931, dates in which the advance of Nazism and fascism was a burning issue in the world.

A few years ago, the former administrator of the Cathedral of Tampico, Monsignor Elías Gómez Martínez, denied that the swastikas were placed to pay tribute to the National Socialism of Adolf Hitler, but that they were placed because the symbol has older positive meanings. And he is right.

Before Hitler the swastika was best viewed by mankind

The swastika was used at least 5000 years before Hitler did on his Nazi flag. It comes from the Sanskrit svastika which means “good fortune”. It is also a sacred symbol for Hinduism, Buddhism, Jainism, and Odinism.

There are indications that the swastika made a major resurgence in the late 19th century after archaeologist Heinrich Schliemann found it on pottery within ancient Troy, thereby ensuring that it was an important religious symbol of the remote ancestors of the Germans.

Back in the case of the swastika in the central aisle of the Cathedral of Tampico, these had the possibility of being removed in the mid-1990s with the permission of the National Institute of Anthropology and History ( INAH ). However, the priests responsible for the temple decided not to do so, as explained by Monsignor Elías Gómez Martínez, but why?

On this mystery, Edgar González Ruiz, a researcher specializing in the political right in Mexico, offers some light. He explains that the then bishop Rafael Gallardo García did not want to keep the symbols due to his relationship with Nazism, however, those who opposed it were the members of the “ultra-Catholic” sector of Tampico society.

It seems that we will have to live with the doubt whether the 141 swastikas that go from the door to the atrium of the Cathedral of Tampico were placed with or without intention to sympathize with one of the most hated characters in universal history.

Tampico; Grandfather destroys entrance and vehicle by forcibly entering the vaccination line at the UAT (video)