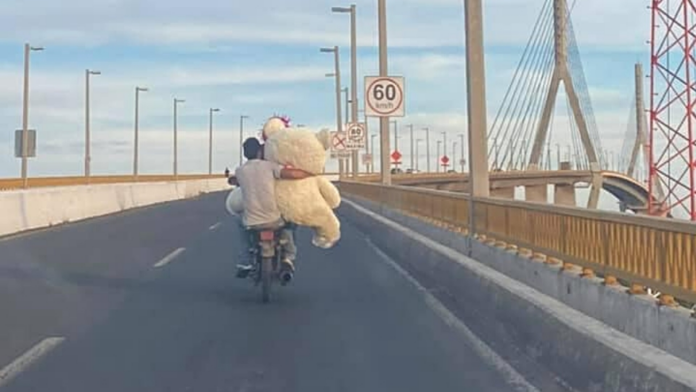 Due to the pandemic, there was no party for her daughter Analy and after the published photograph she has received many calls from people who want to celebrate her birthday.

Traveling aboard a motorcycle with a huge bear to give to your little 3-year-old girl, regardless of size, and having to cross the Tampico Bridge to get to her house in Matarredonda, in the north of Veracruz, is without a doubt the greatest show of love to a daughter.

Adaly Casanova Casanova, father of little Analy recently bought a raffle ticket for a giant stuffed pink panther, she wanted to give it to her little girl who would celebrate her third anniversary, unfortunately, she did not win it, however, the person who made the raffle, days later he offered for sale a giant bear that he acquired and would pay for it in easy payments.

This is how the trajectory began from the Obrera de Tampico neighborhood, where every day at an early hour, from Mataredonda, in the north of Veracruz, he arrives at a business to butcher chickens and meat to sell from 07:00 hours.

When he left work, the seller arrived with the stuffed animal, he thought it was something smaller because he only saw it in a photograph, he had already made the commitment so he looked for a black plastic bag to wrap it and he couldn’t, so he boarded the motorcycle accompanied by a friend to drive, thus starting the journey, without imagining that someone would take the photograph and make themselves known on social networks.

After a couple of hours, his friend, the one who was driving the motorcycle, told him to send him the photo where the girl with the bear was, because on Facebook, a photo had already been published and they were making hundreds of comments as if he had fought with his partner and other things.

“My friend uploaded it and tagged it for me and immediately they start looking for me because it went viral, they have offered me trips to Six Flags, I have the support of three clowns to make a party, a boutique of dresses for party, they already spoke to me to to give me the character that the girl wants and it will be from Frozen, well, it was not my intention, but many people have come offering support for my girl. “

So many gifts have been offered that they have already decided that they will have a party for their daughter.

“We will have a celebration for her next week, they have offered me other gifts, in fact my phone does not stop ringing due to notifications on Facebook, yesterday I received about 30 calls from people who want to support me but it is something that I never asked or I even took the photo, we don’t know who took it, I was just riding the motorcycle and in the back and a truck that I think was where they photographed me and uploaded it to the networks. “

The plush bear measures approximately one meter and 25 centimeters, now he lives with the girl, his name is Analy Casanova Aguirre, he turned 3 years old on October 2, resident in Congregación Primero de Mayo in Mataredonda, municipality of Pueblo Viejo, Veracruz.

Semar presents dredging plan for ports and rivers of Mexico