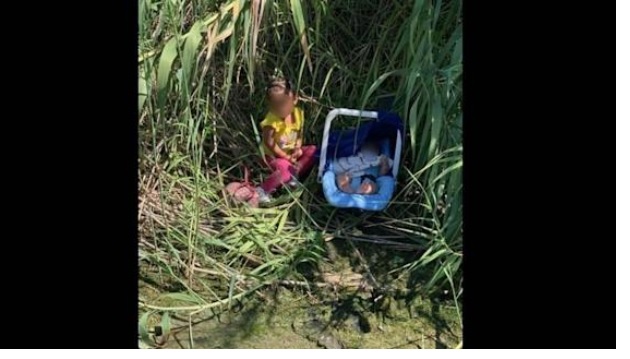 Reynosa, Tamaulipas (September 16, 2021).- Two children were found abandoned along the Mexico border not far from the line that divides Reynosa, Tamaulipas, and McAllen, Texas. The two kids were left there and a note was left with them, officials said.

U.S. Border Patrol agents on the Rio Grande spotted an “unusual color” along the riverbank Tuesday and discovered the children, according to U.S. Customs and Border Protection.

A note left under a baby carrier revealed the children are siblings from Honduras, officials said. The 2-year-old girl, dressed in bright pink and yellow, had stayed by her baby brother’s side at all times, a photo shows.

Border Patrol agents searched the nearby area and didn’t find anyone else.

In early August, the number of unaccompanied migrant children taken into Customs and Border Protection custody reached a single-day high of 834, according to U.S. News and World Report. The Biden administration began releasing the figure in late March, American news outlets have reported.