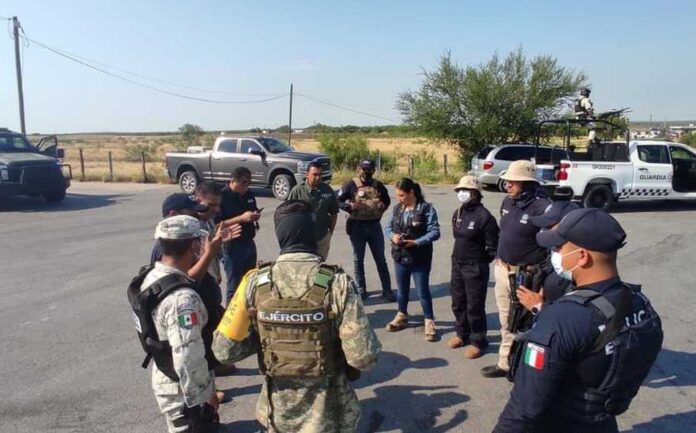 Issue of missing persons on the road is federal: Spokesperson of the state of Tamaulipas

He points out that there is constant communication between the Prosecutor’s Office of Nuevo León and Tamaulipas on this issue.

With regard to the issue of disappearances that have been taking place on the Monterrey-Nuevo Laredo highway, Tamaulipas Public Security spokesman Luis Alberto Rodriguez reiterated that they are working together with the neighboring state emphasizing that the disappearances are related to the transportation issue and the federal one.

“There is constant communication between the prosecutor’s office of Nuevo León and Tamaulipas on this issue and also through both state and federal search commissions.

After Jaime Caldero, Governor of Nuevo Leon ask that because of the insecurity not travel to Tamaulipas, the spokesman said that work is being done to provide security.

To translate video from a foreign language:

You’ll see that the subtitles have automatically been translated into English. While everything won’t be translated with 100 percent accuracy, the whole idea is that you can at least get a rough translation so you can easily follow along.

“Tamaulipas has been working precisely so that there is tranquility of safety on the part of users, but in the particular case of the road we must insist, we are talking about a very important traffic route of transport vehicles”

In the case of the American family still missing, he mentioned that “on June 17, the search mechanism was activated, particularly with the participation of the Tamaulipas prosecutor’s office, because the relatives of these people only presented their report of missing persons in Tamaulipas.”

The “Todos Somos Uno” collective of families of the disappeared on the road section from Monterrey to Nuevo Laredo demonstrated in downtown Monterrey on Thursday, June 24, to demand that the state government take action in the matter.

So far, the number of disappeared is 109 people, of which, 73 disappeared this 2021 and the rest; 36 people were reported missing since 2020, reported Reforma.

The highway is one of the main routes to reach the United States and coincides with the profiles of people who have not returned to their homes since October 2020, most are freight drivers, Uber or Didi, according to Animal Politico. Except for new cases in which entire families have been reported missing.

The National Commission for the Search for Missing Persons in Mexico is involved in supporting the families involved.

According to data from the National Search Commission, so far this year in Tamaulipas there is a record of 93 missing and unlocated people, while in Nuevo Leon the report is 247 cases.

The civil association of Citizens in Support of Human Rights indicated for Milenio that the ages of the disappeared people are mostly between 20 and 30 years old.

Among the travel alerts issued by the Department of State of the U.S. Government indicates in this regard of the road section that government employees the transfer will have to be made on the day and with prior authorization. In the case of Nuevo Laredo do not leave between midnight and until 6 am.

June 3: Five people were reported missing, who were on their way to work from Monterrey to Nuevo Laredo.

June 13 – Three U.S. persons, a woman and her two children, were reported missing and were moving from Sabinas Hidalgo, Nuevo León, to Nuevo Laredo, Tamaulipas, in order to reach Laredo, Texas.

June 22: The Nuevo Leon Prosecutor’s Office reported the appearance of 17 people, 16 were said to have returned on their own, and one death was reported.