According to the technical report of the Ministry of Health, since the beginning of the epidemic, Mexico has accumulated 825,340 confirmed cases and 84,420 deaths caused by the SARS-CoV-2 virus; however, on the last day, 4,295 new infections and 475 new deaths were registered.

On the other hand, the number of people who contracted the disease and who have already recovered amounts to around 601,571.

José Luis Alomía Zegarra, general director of Epidemiology of the Ministry of Health, reported that there are already 2,109,456 people analyzed using a diagnostic test with a current percentage of 37% positivity.

He explained that if that percentage is applied to accumulated cases, real cases could amount to 955,768 people; however, of that number only 4% (37,463) are active cases, that is, people who have had symptoms of the disease in the last 14 days. 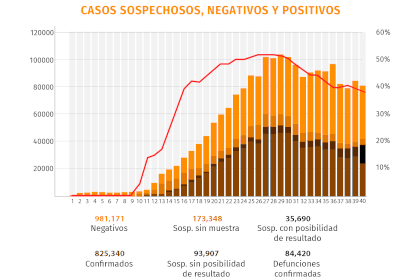 In contrast, Nayarit, Campeche and Colima concentrate the lowest number of active cases in the country.

It should not be forgotten that the 10 entities with the highest number of accumulated cases are Mexico City, the State of Mexico, Nuevo León, Guanajuato, Sonora, Veracruz, Puebla, Tabasco, Tamaulipas, and Jalisco and that together they make up more than half ( 63%) of all accumulated cases registered in the country. 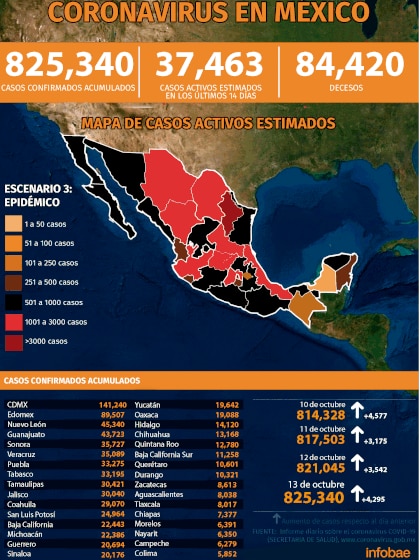 Regarding deaths, up to now, the curve of their occurrence has maintained a downward trend, reaching -39%.

According to the technical report, there are 14,521 suspicious deaths from COVID-19 that include those pending by laboratory (n = 2,338) and those that are in the process of association-clinical-epidemiological opinion (n = 12,183) in SISVER.

In this sense, Mexico City, the State of Mexico, Veracruz, Puebla, Baja California, Jalisco, Sinaloa, Nuevo León, Guanajuato and Sonora continue to be ranked as the 10 entities that have registered the highest number of deaths and that together represent more than half (63.3%) of all those in the country. 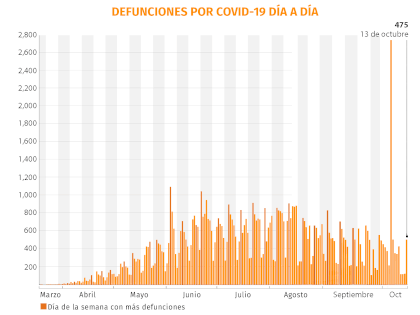 During the press conference, Alomía pointed out that in the last two days there was a slight increase in hospitalization, although he said that “this still does not show a problem as such, since this increase is still at low levels, but it will it is important to follow up on this trend, because if hospitalizations increase this may be an indicator that transmission and cases may be increasing in the community ”.

The specialist explained that around 10,978 people are hospitalized for coronavirus throughout the country, and the maximum occupancy of beds is 18,223.

“This has represented a slight increase indeed, but it is still an increase in hospital occupancy”

The 29% of general beds to serve patients COVID-19 are occupied, as well as 25% of intensive care beds to meet the most critical patients requiring support from a mechanical ventilator to breathe.

On this occasion, Alomía did not present the hospital occupancy graph by entity, as it had been doing every afternoon.

Andrés Manuel López Obrador, president of Mexico, reported in an afternoon conference the pre-purchase commitment with Pfizer, AstraZeneca and CanSino Biologics for more than 35 billion pesos to immunize 116.69 million Mexicans from the end of the year, which will be when it will have the COVID-19 vaccine.

With the arrival of the coronavirus vaccine, it is expected that 2 million 625 thousand people can be vaccinated in December; in January and February to 3 million 469 thousand people and in March, to 11 million 48 thousand.