Agents of the National Guard arrived at the scene, but could not contain the rapture

The truck traveled hundreds of kilometers from the city of Monterrey, Nuevo León, with a load of approximately 60 tons of beer boxes that could not reach its final destination in Tampico, Tamaulipas.

On Thursday, October 1st a Kenworth double articulated trailer that transported the product was overturned at kilometer 40 of the Zaragoza-Victoria highway, near Las Tortugas ejido.

According to local media, the accident occurred around 06:00 AM when the driver dozed from exhaustion, invaded the opposite lane, and then overturn.

In the accident, both containers broke, leaving hundreds of boxes of “caguamas” ( large beer bottles) scattered on the asphalt strip and its surroundings. 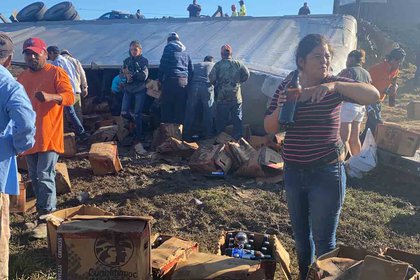 Beer in hand, residents took advantage of the spill of the merchandise (Photo: Courtesy)

It was like this that in less than 30 minutes and without caring about causing injuries to their hands by finding broken bottles that, both men, women, and children from the ejidal zone, chose to take the alcoholic drink for free rather than help the injured driver.

Several photos of residents who arrived immediately to loot the merchandise from the trailer and take it with the help of cars and trucks even circulated in the media .

Minutes later, officers of Civil Protection and the National Guard (GN) arrived at the scene, they helped the driver, which resulted with head injuries.

Likewise, the GN agents tried to contain the robbery; however, they could not control them as it increased as more vehicles passed through the place. 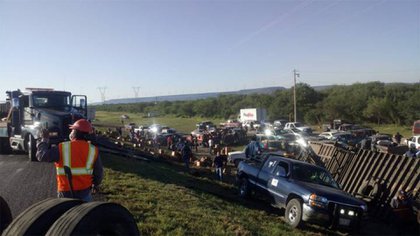 For their part, State Police officers had to block the road for more than three hours , which evidently caused chaos.

According to the experts, the incident resulted in losses of millions of pesos when the cargo was lost and the material damages that the unit presented were added, of course, the vehicle and the cargo both have insurance.

Apparently this alcoholic drink is a very precious product for Tamaulipas. It should be remembered that at the end of last May, when there was a shortage of beer throughout the country, as a consequence of the stoppage of activities due to the health contingency of the coronavirus ( COVID-19 ), the arrival of beer caused emotion among the population.

And it is that in social networks videos were broadcast of the moment in which the inhabitants of the Pánuco area received the transporters with applause, honks and whistles , as if they were national heroes.

However, they were greatly disappointed to discover that it was only transporting beer of a brand that only contains 1.8 percent alcohol , and was the only one available at the time in various areas of the country.

It is worth mentioning that most consumers considered themselves well served, as they said “It´s better than nothing” because they could not pay 200 pesos or more for the cardboard of the other brands, or of the “loggerheads” that sold them in the warehouses. to more than 35 pesos of the normal thing.

According to the Bank of Mexico , between January and July 2020, Mexico exported 2,492 million dollars of this drink to the world, which meant a contraction of 18.1 percent compared to the same period of the previous year.

In this way, beer exports registered their largest historical drop for a similar period since there are records.