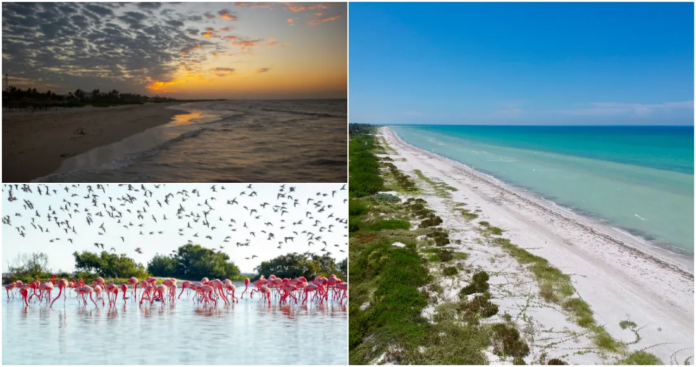 Dispossession of land on the Yucatan coast: with “falsified” certificates

The Specialized Prosecutor for the Fight against Corruption initiated investigations for the dispossession and alienation of land in Dzilam de Bravo, Sisal, Santa Clara, and Celestún.

The prosecutor specializing in Combating Corruption of the State of Yucatan, José Enrique Goff Ailloud, confirms that this unit opened investigation folders in 2019 related to the fraud of the so-called “coastal real estate mafia”, committed in Dzilam de Bravo, Sisal, Santa Clara and Celestún, and revealed by Diario de Yucatán in recent days.

The official assures that the Prosecutor’s Office initiated the investigations as a result of the denunciation of several dependencies, according to which the lands involved would not be the legal estate of those municipalities, as was made to believe, but property of the nation.

Given the presumption of the commission of possible acts of corruption, the Specialized Prosecutor’s Office opened the investigation folder number C1/10/2019  for the free award of 24 cadastral lots, supposedly from the legal estate of the municipality of Dzilam Bravo, granted by the authorities of that town.

Derived from that folder, on February 20, 2020, the Prosecutor’s Office ordered the closure of the electronic folios of those 24 properties, but in June 2021 it canceled that closure, apparently due to the alleged prescription of the crimes prosecuted.

In the case of Celestún, the Prosecutor’s Office opened two investigation folders that, in effect, prevented the illegal transfer of large properties from that port to members of the “coastal mafia.”

Dispossession of land on the Yucatan coast

This group would be headed, among others, by Mario Xavier Peraza Ramírez, today a federal deputy of the PVEM-Morena-PT coalition, and the former mayors of Dzilam de Bravo and Celestún, in the period 2015-2018, Julio Abraham Villanueva Rivero and Santiago Leonel Rosado Mena, who seized at least 10,594 linear meters of beach in those municipalities.

The dispossession was carried out through the artificial creation of cadastral lots on national land to convert them, outside the norm, into properties of the legal estate of those two ports, taking advantage of the appointment of Mario Peraza Ramírez as director of the State Cadastre between October 2015 and June. of 2016.

In this way, through the falsification of Cabildo acts and, in some cases, with rigged Cabildo sessions, the mayors awarded dozens of properties “free of charge”, supposedly from the legal estate, in favor of ghost companies linked to Peraza and his partners.

Positioning of the Anti-Corruption Prosecutor

In a statement sent to our Newsroom, the Specialized Prosecutor for Combating Corruption of the State of Yucatan indicates that, effectively, that unit “has initiated investigation files for probably illegal acts related to the irregular sale of real estate belonging to coastal municipalities in favor of individuals”.

In this regard, it has carried out “the pertinent legal acts to prevent the advancement of greater damages.”

“In the case of one of the investigation folders opened in 2019, of which it is reserved to provide the number and particular data derived from the secrecy of the information linked to its functions, (but which is probably the one marked with the number C1/ 10/2019, as we published) the complaint was filed by public servants of the Insejupy”.

In it “medullary facts were pointed out that originated from a request for documentation that the state delegation in Yucatan of Sedatu made to that agency.”

Irregularities with real estate owned by the nation

That request, says the Prosecutor’s Office in its brief, allowed Insejupy officials to detect “the lack of cadastral records related to the granting of nomenclature or cadastral planking of various properties in the municipality of Dzilam de Bravo, which led to the presumption of the theft of said files, this anomaly being the central subject of the complaint filed with the State Anti-Corruption Prosecutor’s Office.

According to the statement, “according to the background of the case, the origin problem would have arisen because these properties were the property of the nation and would have been illicitly alienated in favor of individuals.”

For this reason, it is indicated, “regarding the affectation produced by these donations or disposals, it was a matter of federal order .”

“By virtue of this, in order to avoid further damage, the investigation folder ordered that the appropriate registration measures be taken so that things were kept in the legal state in which they were found.”

“However, against said action, the purchasers of the land filed various amparo claims ordering the federal court to immediately lift the insurance. In other words, the insurance of the properties was lifted by court order.

Regarding the loss of the documentation, supposedly in the custody of the Insejupy, the Prosecutor’s Office explains that “given the time elapsed between the events and the complaint, considering the lack of control that existed in the files (of that unit), as well as the procedure of digitalization that had been carried out, the lines of investigation were considered exhausted, without elements to clarify the fact.”

Due to the above, ” the folder was temporarily archived while new elements are available to proceed legally.”

A similar case arose in Celestún, says José Enrique Goff Ailloud, “but unlike the others, in this case there was a registry record through which irregular disposal operations could be detected and proven, and at the time He brought criminal action, achieving the link to the process of the entire Cabildo, the businessmen and even the appraiser for the degree of participation in the illicit “.

“With this, the restitution of the properties was achieved, first, through a precautionary embargo and then definitively in favor of the municipality.”

Indeed, the Prosecutor’s Office, in August 2021, linked the former mayor of Celestún, Leonel Rosado Mena, and seven of his councilmen, who authorized the sale of two valuable pieces of land owned by the municipality, to a group of businessmen, for a tiny amount.

What does the law say about the free adjudication of a property?

In accordance with the Government Law of the Municipalities of the State of Yucatan, the free adjudication of a municipal property requires the commitment of the beneficiary to build a house of social interest there.

In the case of legal persons, they must document their intention to promote social and economic projects, generating employment, in the field.

In this case, this never happened.

The former mayors, in collusion with Mario Peraza Ramírez, federal deputy of District II for the PVEM-Morena-PT coalition, awarded thousands of linear meters of beaches free of charge —with a high commercial value today—, on some occasions to other people, at simulated prices, and in others themselves and their friends and relatives, who kept the properties obtaining large profits without promoting an economic development project, as required by law.

One case, out of many, that shows the magnitude of the dispossession, occurred on May 20, 2016.

On this date, by means of a deed drawn up by the public notary public of Ucú, Albert Yadir de Jesús Córdova López —separated from his position by the state government in January 2019, accused of corruption—, the City Council of Dzilam Bravo, represented by the mayor Villanueva Rivero and the secretary of the Commune, Carmen Trejo May, awarded four valuable properties free of charge to the company Alimentos Procesados ​​Peninsulares, SA de CV, owned by Jorge Carlos Rodríguez Castillo.

These properties correspond to the following cadastral lots of Dzilam Bravo :

Two of these properties, lots 4264 and 4265, were purportedly disincorporated from the municipality and awarded free of charge in the extraordinary sessions of the Cabildo on May 18 and 19, 2016.

Of the other two properties, the date of the sessions where their disincorporation would have been approved is not known.

The justification of the authorities of Dzilam de Bravo to authorize the free adjudication of these properties, with 483 meters of beach altogether, was based on the commitment of the beneficiary company to carry out projects with “purposes of a social nature, generation of jobs and development economic”.

However, data collected shows that development projects were never promoted in these four lots.

On the contrary, three of the lots, those marked with the numbers 4258, 4265 and 4267, became the property of Julio César López from Chiapas and his daughters Carina Guadalupe, Mitzi Karen and Cristina Guadalupe López Roldán, considered to be namesakes of Peraza Ramírez and partners. .

Lot 4264, with 17 meters of beach, located in the extension of Calle 11, Dzilam de Bravo, off the highway to Santa Clara, was left in the hands of Peraza Ramírez’s wife at the time, Karina Márquez Dogre, after who also later awarded him other properties.

But something more serious was discovered in the case of the land ceded free of charge to the company Mayan Woods, SA de CV, owned by José Luis González González, by former mayor Julio Abraham Villanueva Rivero.

However, the adjudication of these lands would have been approved, supposedly, according to the respective Cabildo acts, in March 2014 by Villanueva’s predecessor, Pedro Castillo Reyes, although he assures that those acts are false.

Together, the four properties add up to 483 meters of beach and their adjudication was approved with the same argument: for ” purposes of a social nature, job creation and economic development .”

These lots remain idle until now, in the hands of Mayan Woods, which was also benefited in Celestún, by another member of the “coastal mafia”: Leonel Rosado Mena.

This former mayor allowed the registration in the Public Registry of Property, in the name of that company, on June 22, 2016, of lots 3859, 3860 and 3870, of Celestún, with 1,714 meters of beach altogether. Here, too, the free adjudication appears supposedly approved by her predecessor Rosa Alba Acosta Narváez, although suspicion persists about the legality of the respective Cabildo minutes.

These three lots are still in the possession of Mayan Woods, which has not promoted any economic development plan there

Tampico bets on the development of mixed-use buildings

AMPI warns of fraudulent developments in the Yucatan