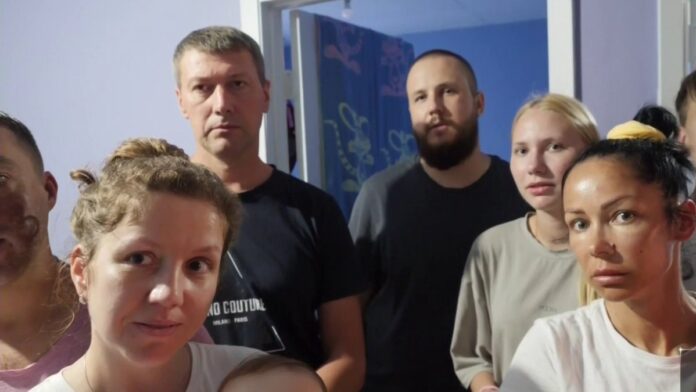 According to the US Customs and Border Protection Office, in 2021 there was a historic increase in arrests in Tijuana and San Diego compared to the 2020 figures.

The northern border of Mexico has always been a highly observed territory, both by the authorities of the United States (USA) due to the illegal migration that occurs year after year, as well as by the citizens of other nations since it is an option in order to enter the North American country.

According to Customs and Border Protection (CBP), last year, despite the COVID-19 pandemic, there was an increase in arrests and illegal attempts to cross the border from the Mexican side by people from the Russian Federation.

Based on the data provided by the US agency, before 2021 a maximum of 80 people arrested with Russian nationality were registered; while last year the arrest of 6,385 Russians was recorded.

The US embassy in Russia has suffered diplomatic dismissals (Photo: REUTERS/Maxim Shemetov)

They added that up to the month of May, a historical maximum of 205 Russians had been detained, the same ones who tried to migrate from Mexico to the United States; however, it was from June that the situation began to increase.

In the sixth month of 2021 alone, 402 Russians were insured; while for July and August, the numbers did not decrease, since 702 and 758 arrests were recorded, respectively. However, by the month of September, 1,432 arrests had been exceeded; in October there were 1,577, and in November 1,711.

According to the US authorities, Tijuana is the favorite place to cross illegally towards the US (Photo: EFE/Joebeth Terriquez/File)

Tijuana, the preferred place to cross into the United States

Likewise, both the US agency and different media have reported that the city of Tijuana, Baja California, is the point of the entire border between the two nations where the most arrests have been made.

According to different activists, the Mexican city has begun to document the establishment of a “mafia” dedicated to human trafficking, especially those from Russia, which already has a modus operandi.

The director of Attention to Migrants of the Tijuana City Council, Enrique Lucero Vázquez, explained that the people inside these mafias charge up to 10 thousand dollars to help Russians cross the border. With this amount, the members of these groups agree to bring them from their country, lodge them in Mexican hotels, cross them by air or sea or take them to the border to request asylum.

In December 2021, an accident was recorded that exposed the mafias trying to cross the border between Mexico and the US with Russians (Photo: EFE/Joebeth Terriquez)

Only at the end of December 2021, there was a serious accident at the San Ysidro port of entry, in San Diego, California, where 18 Russian migrants were detained, including five infants, who were traveling aboard two cars from Mexico.

According to the CBP statement, around 9:30 p.m. on December 12, a Ford pickup truck and a Mercedes sedan attempted to enter the United States at high speed; which caused an American officer to fire approximately four times, one of the bullets hit the Mercedes and collided with the truck.

This event exposed the situation that has begun to escalate on the US-Mexico border.

The migratory relationship between the US and Russia is not at its best (Photo: EFE/EPA/MIKHAIL METZEL/SPUTNIK/KREMLIN POOL/POOL MANDATOR)

It should be remembered that the relationship between Russia and the United States, from the end of World War II to date, has been intermittent; however, the US government was always permissible with visa or asylum applications so that political dissidents or those belonging to persecuted groups could access the nation in search of a better quality of life.

However, due to the pandemic caused by SARS-CoV-2, the US -like many other nations- made the decision to close its borders in order to cut the chains of infection in its population. While in Russia a wave of migration to neighboring countries and some of America began to be glimpsed, which was driven by the government’s repression against the political opposition, civil society and the independent media.

In addition, to the previous context was added that the United States embassy in Moscow had to stop issuing visas, because since 2020 massive diplomatic expulsions began to increase, as well as the prohibition of hiring local employees, which left without enough staff to the US offices to continue their work.

How much does Mexico take advantage of its free trade agreements?