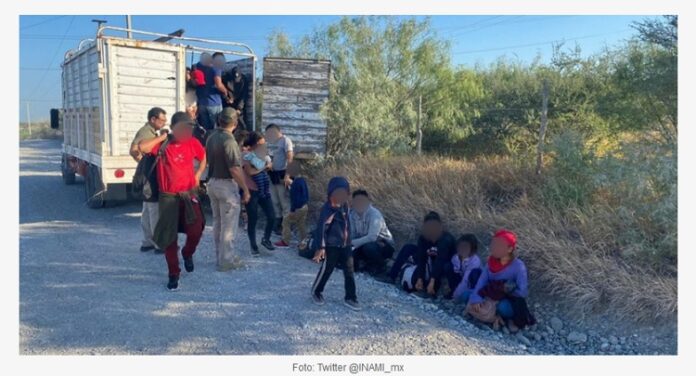 Personnel from the National Institute of Migration rescued 103 migrants of different nationalities in the limits of the states of Nuevo León and Tamaulipas.

At the limits of the states of Nuevo León and the northern border of Tamaulipas, personnel from the National Migration Institute rescued 103 migrants of different nationalities who were abandoned in the box of a Torton type truck.

According to the information issued, 80 were from Honduras, 23 from Nicaragua.

The officers detected that there were 29 individuals traveling in family, and 14 unaccompanied minors.

The rescue occurred on Thursday, September 9th, around 8 in the morning when federal officials and Civil Force personnel were on guard in the gap known as “El Mago”, which links the municipality of General Bravo, Nuevo León, with a rural area known as Santa Anita, belonging to Camargo, Tamaulipas.

In January of this year, 19 people, including 16 migrants from Guatemala, were executed and burned in Santa Anita.

In addition, as another precedent, in days spent in a warehouse in that same town, the INM found more than a hundred migrants who were left to their own devices without food and water.

In the recent case, the driver of a truck with pens noticed the presence of the authorities, so he decided to leave the unit.

The staff proceeded to remove the people from the back of the truck, give them food, hydrate them, and request medical support to know their state of health.