Fox was especially critical of the measures taken by the 4T government in the face of the recent floods in Tabasco, which left more than 170,000 victims.

“He had seen! From when does a president make a decision to harm the people? Or that they know little about how to govern. One is as bad as the other, ”Fox wrote about AMLO’s statements in which he admitted to having affected the poorest people.

“We had to choose between inconveniences, not to flood Villahermosa or for the water to come out through the low areas, of course the poorest people were harmed, but we had to make a decision,” said the president. 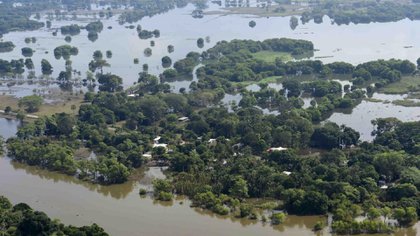 Fox criticized the current government due to the floods in Tabasco (Photo: Cuartoscuro)

In the following tweet, Fox continued his criticism: “ In whose head does it fit, intentionally flood, to harm indigenous people and poor people? How can a president have such an idea?

In another tweet, Fox compared AMLO to Luis Echeverría, who ruled Mexico from 1970 to 1976.

“Trace the charcoal of that populist and demagogue who destroyed the best future of our country. History repeats itself, ”Fox wrote on the social network, where he has 1.3 million followers.

In his most recent message, the former president extended his criticism against the current president.

“With everything and mornings, a multiplicity of written press, a large number of radio and television newscasts, for 2 whole years it is exceptional, almost impossible, to come across any good news, much less any achievement that will bring us hope for what is missing. Pity x MX ”. 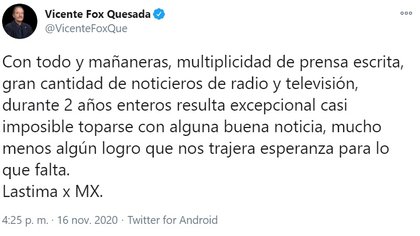 The comment left him dozens of responses, most to attack him.

Fox is not the only former president who has raised his voice against AMLO.

Felipe Calderón, the Mexican president from 2006 to 2012, singled out López Obrador last week for his morning conference, the most extensive so far in the six-year term.

“More than 3 hours, doesn’t the President of Mexico have anything else to do? ¿ A natural disaster in your State? A few hundred thousand victims? Some pandemic that has killed 100,000 Mexicans (probably 300,000)? Some unprecedented economic crisis? 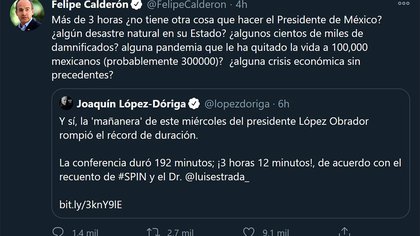 Like Fox, the former president made reference to the floods in Tabasco, although he also touched on other issues. “The ineptitude of this government seems to have no limits. Now the contagions of tuberculosis! they almost tripled due to lack of vaccines; Beyond pretexts, it is administrative inefficiency ”.

According to Luis Estrada, director of SPIN-Taller de Comunicación Política, the “morning” conference on Wednesday, November 11, was the longest since López Obrador began with this daily communication scheme (on December 3, 2018). The session lasted 192 minutes, that is, three hours and 12 minutes.

The previous “record” at the conference was on September 24, since that day the president’s meeting with the media was two hours and 49 minutes.

Calderón had already criticized AMLO for his decision to reduce the amount of the bonus for some officials and made reference to the situation of Beatriz Gutiérrez Müller, wife of the president, in CONACYT.

“The president can lower the bonus, after all his wife already receives the highest scholarship that Conacyt gives, which financially compensates several times the income from the bonus. Of course, the doctors and nurses, the government workers, go out of their way to demagoguery ”