Social Housing 2019, a program implemented by the Vila Dosal administration, had an investment of 900 million pesos

On the morning of this Friday, the actor Héctor Suárez Gomís launched himself against the governor of the state of Yucatán, Mauricio Vila Dosal, specifically for the actions that his administration has implemented with “Social Housing 2019”, a government program that builds houses for the most vulnerable of that entity.

Like his father, Suárez Gomís has shown his dissatisfaction with the Mexican governments and the action plans they carry out, regardless of the color of the party. Through social networks, the comedian made his position known about the new houses that are being built in the south of the country.

“The governor of Yucatán calls a small room that looks like a portable bathroom a ‘decent home’. Mauricio, if he is so worthy, live in one like that for your entire term! Something dignified will never be humiliating … Change your speech so that it stops being INDIGNANT! “, Gomís wrote on his Twitter account after sharing some images showing the houses.

And is that yesterday, Thursday, October 22, the Yucatecan Governor published on his social networks the progress his program has had, this in collaboration with the National Housing Commission (Conavi). In the photographs that she uploaded, a woman identified as Cresencia Uch, Chemax municipality commissioner, is shown receiving the keys to her new home, a white building with a cube-shaped structure that caused controversy among Internet users for the size it is.

“I am glad that Mrs. Cresencia Uch de Xalaú, Chemax police station, already has her room that is part of the 17,000 actions of the“ Social Housing 2019 ”program that we carry out with Conavi, building more dignified homes for the Yucatecans who are more They need it, “ said Vila on his personal Twitter account.

Some time later, Gomís shared the publication and assured that “it cannot be considered worthy” to a house of this type, for which he sent the following message: “Mauricio, if he is so worthy, live in one like this during your entire term! ! ”.

Vila Dosal’s publication has gained strength on social networks and has received strong criticism from Internet users, who describe it as a plan full of “cynicism and shame”.

“That is not a decent home, they should be ashamed”, “I thought they were promoting a bathroom” and “It is a joke for the Yucatecans”, were some comments that can be read in the publications. 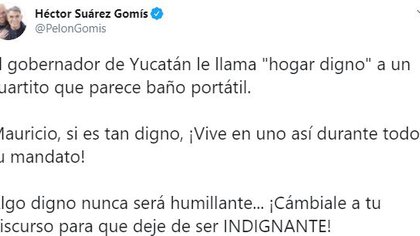 WHAT IS THE SOCIAL HOUSING PROGRAM?

The support of the program consists of the delivery of a subsidy to cover the amount of prior savings necessary to access the support of the Social Housing Program 2019, in accordance with its operating rules.

According to information from the Ministry of Social Development of Yucatan, the work that Cresencia Uch received from Governor Vila Dosal is among the 17,000 that, with an investment of 900 million pesos, are being carried out throughout the state between toilets, floors, bedrooms, and ceilings. 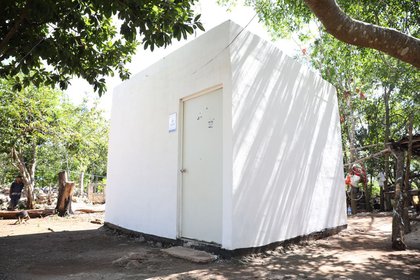 With this program, the Yucatecan government “seeks to provide equal opportunities and address one of the main social deficiencies in Yucatán.” (Photo: Twitter / Mauricio Davila Dosal)

The official website of the entity indicates that, with these actions, Mauricio Dávila “seeks to provide equal opportunities and address one of the main social deficiencies in Yucatán.”

In order to access the program, people must meet the following requirements.

* Reside in one of the municipalities of the state that have entered into an agreement with the state government to participate in the 2019 Social Housing Program.

* Participate as a beneficiary in the Casa Digna Program, in any of its other modalities.

* Home receipt with an issue date no more than two months from the date the conformity tasting is presented. The receipts for electricity, water or landline telephone services will be considered household receipts.