On Wednesday, October 21, it will reach its maximum peak, with about 20 shooting stars per hour

October and November are the perfect months to look up to the sky and make a wish, before closing this traumatic 2020. And it is that on these dates rain of stars as spectacular as the Orionids coincide in the sky , which will reach its maximum peak this Wednesday, October 21.

According to NASA, that night we will have many opportunities to spot a meteor in the dark, since it is expected to fall about 20 per hour. There could even be a lot of activity in the days before and after.

Although professional observation materials are not required -in fact they are discouraged-, to capture shooting stars the choice of location is very important, since climatic and light conditions could hinder observation.

So that you do not miss the event, which will be of moderate intensity, we leave you a step by step with the best recommendations issued by astronomical organizations.

The Orionids will reach their maximum activity on Wednesday, October 21, and the best time to appreciate them will be after 23:00 at night, once the constellation of Orion appears on the horizon, which gives the event its name for being its radiant , that is, the point in the sky from which the meteors appear to come.

Although that will be the best opportunity to see the phenomenon, the International Meteor Organization explained that the intensity has varied from year to year, and that other peaks could also appear throughout the week.

“The expected peak (under ideal conditions) is about 20 visible meteors per hour. However, according to the International Meteor Organization, the strength of this shower has varied from one year to another, and sometimes, it has several peaks during the days close to the expected maximum peak. In addition, there is some evidence that a higher than usual peak may occur between 2020 and 2022. The best time to search for these meteors would be after midnight, but before the sky begins to clear with dawn, ”the agency reported American space.

Although their peak is expected this week, the Orionids can be seen between October 2 and November 7. 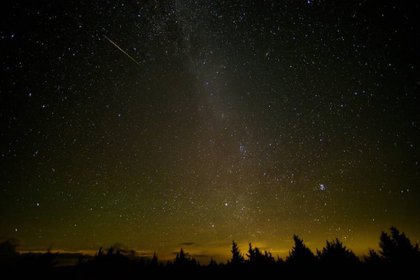 Among its advice, NASA also insisted on the importance of choosing the right place. He explained that the Orionids must be observed from points that are far from the light pollution of the cities; Furthermore, he recalled, the observer has to accustom his eyes to darkness, a process that can take more than 45 minutes.

“Ideal conditions would be clear skies with no haze or clouds, a clear view of much of the sky after midnight, and a location away from any urban light or light pollution . You will need to be patient (20 meteors per hour means an average of one visible meteor every 3 minutes or so) and give your eyes enough time to adjust to the dark (it may take more than 45 minutes for your eyes to fully adjust to night vision , so please don’t turn on the lights or your smartphone to check the time), ”he wrote on his website.

“Those of us who live near city lights will have much less chance of seeing these meteors,” he added.

Step 3: where to look 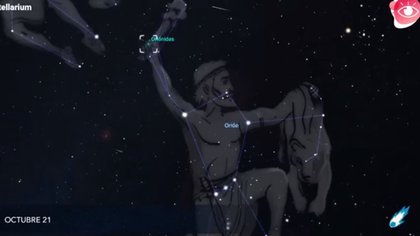 Meteor showers are one of the simplest astronomical phenomena to contemplate, as no professional binoculars or telescopes are required.

To observe the Orionids you must direct your gaze towards the constellation Orion, which as we explained above is its radiant, or point from which the meteors seem to fall. This is visible on the horizon after 23:00 hours, according to information from the Quintana Roo Planetarium Network, and the National Night of the Stars Committee.

If you don’t know how to locate the constellation, remember that there are apps like SkySafari for Android or SkyView for IOS, which help you find the stars on the celestial canvas.