Bills are perfectly valid and must be accepted at any store

The figure of “EL SEÑOR”, as he is known in his land, Badiguarato, Sinaloa, has risen despite his life sentence. There, the people respect him more than the president, the residents say.

The sons of the Mexican narco contribute to that “immortality.” More than a year after his conviction in the United States, the image of El Chapo has been represented in pantries, narco series, and even money.

Its acronyms are everywhere. The initials “JGL” are stamped on the reverse of the 200 peso bills. According to the local weekly Río Doce, one of these printed papers was issued from an ATM in Culiacán.

Beyond the stamp, no other modification of the money is observed. For Banxico this bill still retains its value and it is acceptable that it continues to circulate as it does not corrupt any regulations.

The institution has announced that bills that are worthless are those bills that have “words, phrases or pictures, in manuscript, printed, or any other indelible means, which are designed to disseminate messages to the public, political, religious or character commercial “

According to the experts, these types of tactics are used by drug traffickers, who seal the money and distribute it among people to pay bribes, even to their own operators.

Because it does not have any alteration, the banknotes have national circulation.

On September 28, the Instagram account @therealivanguzman, who claims to be one of the children of Joaquín el “Chapo” Guzmán shared an image of the ticket with the “JGL” stamp.

The identity of that account, created in 2012 and which would correspond to Iván Guzmán, is not proven. In his publications, there are images of cars, luxury trips.

The banknotes were issued in 2019 by the Bank of Mexico, that is, two months after the Mexican kingpin considered the leader of the Sinaloa Cartel was sentenced to life imprisonment for leading a criminal organization, committing murders, trafficking marijuana, cocaine, methamphetamine, and heroin to the United States.

Keeping the image of the infamous drug trafficker alive, the target of the Sinaloa Cartel

Although he will be in prison for the rest of his life, the Chapo family makes various efforts to keep his image alive among the population, immortalize the idea of ​​the drug trafficker as a benefactor and even do business with the fame of the founder of the Sinaloa Cartel.

To achieve this, family members and people who work for the Sinaloa Cartel have resorted to various objects and even food to maintain the presence of Chapo Guzmán in the lands where he was known. The distribution of these reminders of the Sinaloa kingpin, who twice escaped from Mexican prisons, has become more constant during the coronavirus pandemic in Mexico, a time when thousands of inhabitants are going through economic hardships that are needs taken advantage of by the Cartel people to give supposed “support.”

In addition to the bills, the supposed aid to the vulnerable population comes in the form of food baskets, cakes, and even beer.

The tortas with the Chapo stamp 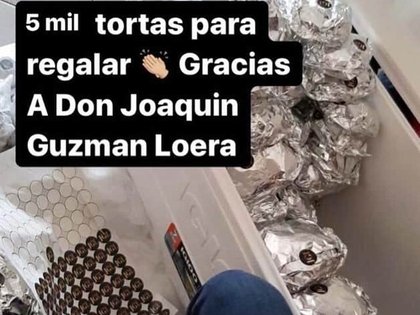 Joaquín Guzmán Loera’s initials were the label of food packages that were distributed to people who were outside a hospital in Culiacán.

The package included drinks and tortas wrapped in foil with a black label with JGL’s initials. The distribution was made by men who allegedly worked for the sons of Chapo Guzmán on top of a white truck from where they gave people a package.

In a video, it is heard that they are asked who sent the food support to which one of the subjects with face masks and gloves responds that the son of Chapo and “Shorty”.

“ El Chapo and El Chaparrito’s son. There we are for anything that is offered! ”Says one of the men in the truck.

“Name boys, you are going to heaven”, it is heard that the people who received the packages, which were presumably tortas, answer them. 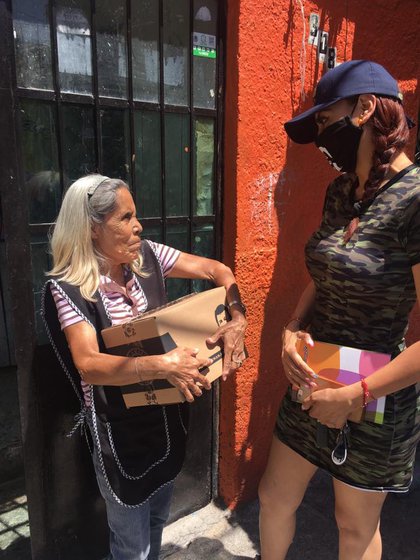 In the middle of the month of mothers in Mexico -may- images and videos of an alleged delivery of pantries on behalf of the Sinaloa Cartel were disseminated in the streets of Culiacán, the capital of that state.

As is common, the distribution was made in a low-income neighborhood called Bicentenario. “Thank you very much for the support, which is the best support we have received […] These are pantries, they are not cucumbers or tomatoes, so my thanks and we are 100% with Joaquín, so they can see her there with me too ”Says a woman while holding the food. They also had the characteristic JGL initials tag. They were in plastic boxes and they had products like toilet paper, soap, and more products. 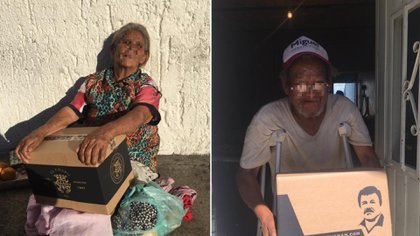 Last April, pantries were distributed in cardboard boxes with the image of the Chapo 701 brand, launched by Alejandrina Guzmán, the boss’s daughter.

Through a statement published on the Facebook page El Chapo Guzmán, which he uses to promote the El Chapo 701 clothing brand, he specified that personally and under all security protocols, he would send a pantry to all the people of the third age.

” We know that this situation will pass soon, and when this happens we will be able to receive you at our point of sale and at all our national events to be closer to all of you with the best products,” says a statement signed by Alejandrina Guzmán.

The distribution dynamics consisted of sending a message to WhatsApp or through Facebook requesting personal help. Similarly, support could be requested for someone with low resources.

Another example. On Saturday, May 2, Alejandrina delivered some 300 gifts in Guadalajara with the image of the drug lord.

The gifts were taken by employees of the El Chapo 701 company to the Jalisco neighborhood, one of the most impoverished and with the highest crime rates in the city.

“We did not want to let this day go by, the foundation of Mrs. Alejandrina Guzmán is in that tenor, on the social issue, children are the future of our society and we are on the way to that, we know that it is difficult to hold events right now to bring people together, but we are doing it as neatly as possible to give them a smile, “said Julio Campos, president of the company to Efe. 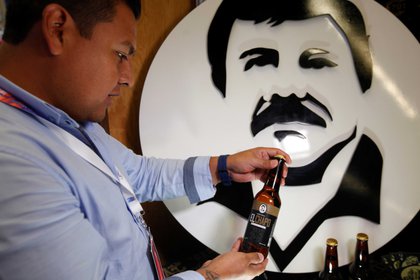 Guzmán Loera’s daughter launched the El Chapo 701 brand that features a craft beer in addition to the clothing and footwear line that pays tribute to the drug lord.

El Chapo 701 is a trademark for the daughter of the drug trafficker imprisoned in the United States and sentenced to life imprisonment and an additional 30 years.

The brands, says the clothing line portal, are owned by Joaquín Guzmán through the company Don Archi, S .A. CV

Giselle Guzmán Salazar, unlike her brothers, entered the business through production, where Mexico is also a powerhouse.

The country is the fourth-largest beer producer in the world with 124.5 million hectoliters, according to 2019 figures from Heineken and INEGI, one of the beer companies based in Mexico. The first product in China with 440 million, then the United States, with 217 million, and in fifth position Germany, with 92 million.

The production of beer in the country has had a sustained growth in recent years, says INEGI.

The “El Chapo” beer was presented in Jalisco, the fourth state in the country with the largest number of retail beer businesses.

Alejandrina Guzmán Salazar’s brand is a label in a range of black, brown, and white that wraps around the bottle of “ El Chapo Mexican Lager ” (4% alcohol content). Inside a circle, the famous face of the mustachioed drug lord completes the design.

The US withdraws Mexico’s certification on shrimp fishing